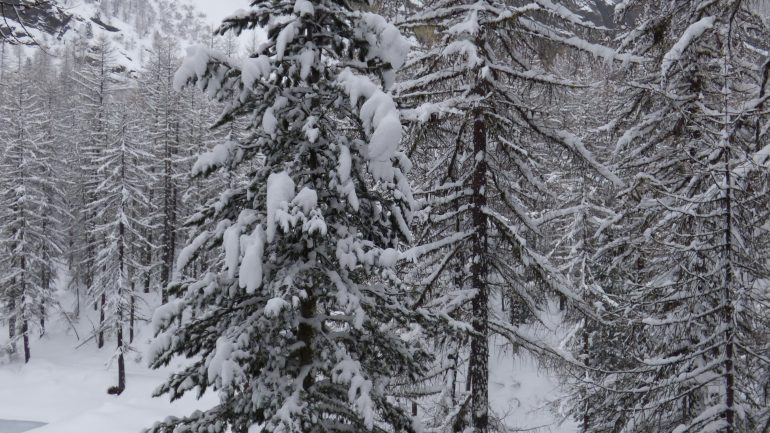 For a few years now, I have been lucky enough to go to the Rhêmes-Notre Dame Valley in all seasons. It is one of the first side valleys in Valle d’Aosta (highway exit Aosta Ovest-Sant Pierre). Long and narrow, more or less 86 m2 and 1700 m above sea level, half of it belongs to the Gran Paradiso National Park (on the orographic right side), while the other half (the left side) has been for centuries the hunting ground of the Rossi di Montelera Counts, and is subject to avalanches. Until the Second World War, when the road was built (partly protected by galleries), the upper part of the valley was isolated for 6 months a year because of snow and avalanches.

These particular conditions, preserved my Enchanted Valley over time, leaving it almost untouched by man: there are few, tiny villages and many small architectural remains, such as mills, ovens, chapels and 17th Century chapels, and the hydroelectric power station built in 1921. In Chanavey, a small ski facility attracts the majority of the tourists in winter. After that, the valley is a succession of woods, lawns, pastures, streams and small lakes. It is a paradise for hikers (not many), and, in winter, for those who love to walk on the flat or at height, maybe with snowshoes (ciaspole), or to ride horses or mountain bikes, doing cross-country ski, plunged in silence and white. According t the season, it is easy to find marmots, steinbocks, chamoises and foxes.

In the woods, there are many larches (Larix decidua), together with Norway spruces (Picea abies), Swiss pines (Pinus cembra) and some downy birches (Betula alba). In late spring and early summer my Enchanted Valley is full of Alpine flowers and new buds; in summer it is a moist and green dream; in autumn, and explosion of gold and bronze; in winter, a white and muffled kingdom, where I woke up, a few days ago, while it was snowing heavily.

The Artalle wood and its secular larches: for more than four centuries, a massive wood protects the small hamlet of Artalle (located on the orographic right of the valley, within the Gran Paradiso National Park) from avalanches. Historic testimonies, confirmed by dendrometric data, tell that tree cutting has been banned since 1600, as demonstrated by the 42 specimens of larch still existing: they have important dimensions (not exceptional, however) given the narrow space between them, and are intimidating.

Where to eat: at the Pellaud refuge (Le chalet de Pellaud – Reve du Lac), you can reach it with an easy walk from Bruil alond the beaten road or the path in the wood, up to the pleasant Pellaud lake, where you can fine the old renovated hydroelectric power station. The owners are gentle and offer a home-made Valdostana cuisine, light and refined. You can also go for dinner and, prior reservation, spend the night there in the apartment on the first floor, furnished in an elegant mountain-style. This way, you will surely see, during night or in the early morning, some wild animals.

Curiosity: in the hamlet of Chanavey, there is the Gran Paradiso National Park Visitor Centre, with the permanent exhibition “Bentornato Gipeto!”, telling the story of the extinction and the return of the biggest European bird.

The citizens of the Rhêmes Valley were once known for they ability as romoneurs, that is chimney sweepers; in small teams, they constituted a true corporation of seasonal migrants.

In Bruil, the second to last Sunday of July there is a Valdostane craft fair.