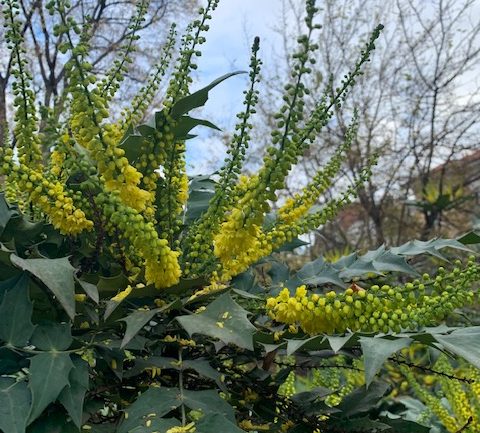 If you think that winter is not the right season to visit a garden, think about the UK, where even in the coldest and most silent season people enjoy leisurely strolls in parks, gardens, botanical facilities and arboretums, discovering a natural “winter wonderland”.

Needless to say, the gardens in the UK, at least the most important ones, are open to visitors all year round, and in addition, British gardeners and landscape architects are particularly keen on plants with a beautiful winter livery, mostly thanks to their evergreen foliage; not to mention bark colour, early flowering, thorns or showy buds, and impressive posture: just think of the plants collected at Kew Royal Botanical Gardens, south of London, or Wisley Garden, in Surrey.

Italy also offers several green facilities which are really worth visiting also during the coldest season of the year.
In addition to parks and public gardens, which are always open, we should consider botanical gardens, both for their spectacular outdoor plants and the tropical, Mediterranean and desert ones, often kept inside the greenhouses; nonetheless, do please check the actual opening hours of each garden, especially during the winter season.

On the other hand, the large historical gardens and parks, privately owned or belonging to institutions and foundations are mostly closed from October-November to March-April, with some exceptions. Some wondrous examples of topiary arts can, in fact, be enjoyed also in winter, thus offering numberless eye-catching works of arts.

Here is our suggested list of “winter gardens”, although you may find some others while browsing www.italianbotanicalheritage.com, which thoroughly covers the Italian botanical heritage.

In Trentino Alto Adige, there’s Arte Sella, a “landart” event, while Piedmont offers Oasi Zegna, an impressive landscape and social intervention launched by the entrepreneur Ermenegildo Zegna in the 1930s and later enriched by Pietro Porcinai and Paolo Pejrone. In that same region, there’s also Burcina Park (also known as the Natural Reserve of the Burcina Felice Pazienza Park), in Biella: a mostly evocative wooded.

In Turin, there’s Valentino Park, the first large public park in the city, built along the banks of the Po river. Then, there’s Reggia di Venaria Reale, a grandiose architectural and landscape complex in the outskirts of town, with some 20 acres covered by a monumental Baroque building, home to exhibitions, shows and concerts, and 15 acres of gardens and orchards. Not to mention the park of the Castle of Masino, near Cavarino (Ivrea), where visitors can admire the large XVIII century labyrinth made of hornbeam hedges, together with the surrounding park and the ancient noble abode.

Visitors should also consider the delightful Hamamelis Garden, a real winter garden with an English twist, built by Dr Cammarano in Borgomanero. The garden is divided into rooms, houses collections of witch hazels, aucubas, and an arboretum of beautifully barked trees, such as birches, Prunus and maples, snowdrops and other flowering plants which look absolutely wondrous in February.

Liguria offers the wonderful Hanbury Botanical Gardens, on the Mortola promontory, near Ventimiglia – a few miles from the French border. The English traveller Sir Thomas Hanbury, also a dedicated botanist, started building this green facility in 1867 and managed to combine a boundless wealth of plants and exotic floras with a great architectural and landscape value.

In nearby Boccanegra, there’s the wonderful garden of Villa Piacenza (it can be visited only by appointment), featuring a wealth of exotic plants mostly blooming in winter. The latter season used to witness hundreds of English and international visitors to the Ligurian Riviera in the XIX and XX centuries. Today, the garden is maintained by Guido Piacenza and Ursula Salghetti Drioli, both excellent botanists, who have dedicated themselves to constant improvements and embellishments.

In Lombardy there are two historical jewels that shouldn’t be missed: the first is Villa Borromeo Visconti Litta, in Lainate (in the outskirts of Milan). Built in the XVI century origin, it’s full of water games, nymphaeums and fountains – it also features a garden with a “green theatre” decorated with yews pruned as truncated pyramids, a long gallery made of two hedges of U-shaped hornbeams, and an English landscape park.
The second jewel is that of the XVII century Villa Litta Panza, in Biumo Superiore (a district of Varese). Widely appreciated for its important collection of contemporary art, collected by Giuseppe Pansa di Biumo, the villa is surrounded by a wonderful Italian garden.

On the other hand, Milan offers the small, but delightful Brera Botanical Garden, commissioned by Maria Theresa from Austria, in the XVIII century. There’s also the new Cascina Rosa Experimental Botanical Garden, in the Città Studi district;
Among the city’s public gardens, we’d like to recommend Sempione Park, with several winter blooms (hazels, Calycanthus and Viburnum x bodnantense) and many wonderful large trees. Then, there’s the little Perego Garden, on via dei Giardini, now cared for and enriched with new plants by the Lombardy Horticultural Association. Visitors shouldn’t also miss the Gardens of Villa Reale, on via Palestro (children must be strictly accompanied by adults), next to the Gallery of Contemporary Art (GAM) and the Montanelli Gardens, right opposite this facility. Not to mention Guastalla Gardens, on via Francesco Sforza, with the large XVIII century fishpond.

In the outskirts of Milan, there’s Boscoincittà, on via Novara: a natural wonder built in 1974 by Italia Nostra association with the active involvement of the residents. There’s also Parco Nord, which stretches on some 1.561 acres among the municipalities of Milan, Bresso, Cusano Milanino, Cormano, Cinisello Balsamo, Novate Milanese, and Sesto San Giovanni. A quarter of its total size features wooded areas, clearings, rows, shrubs, hedges, small ponds and meadows, which have been planted and further improved since 1983.

The Veneto Region offers a must-see destination for both botany and history enthusiasts: on the Brescia shore of Lake Garda, in Gardone Riviera, there’s the famous and most unique Vittoriale degli Italiani. It’s a monumental complex with elegant buildings, streets, squares, an open-air theatre, water games and gardens, built by the Italian poet Gabriele d’Annunzio between 1921 and 1938, with the help of the architect Giancarlo Maroni. It’s a testament to the incredible life and work of the flamboyant poet-soldier and the ordeals suffered by the Italians during the First World War. Visiting it in winter is a good idea because there are usually fewer visitors.

Veneto is also very rich in gardens: in winter, we’d like to recommend the Botanical Garden of Padua, included in the list of the UNESCO World Heritage Sites. It was established in 1545 and it’s the oldest university facility in the world which still stands in its original location. Thanks to that very botanical garden many exotic species were introduced in Italy, such as potatoes, sesame, lilacs, and some varieties of magnolias. Recently, the facility has been fitted with the new Biodiversity Garden: a huge glass and steel greenhouse that collects 1.300 species typical of the tropical rainforest, sub-humid tropical forest and the savannah. It also includes the temperate and Mediterranean climate species, the ones coming from arid climates, the arctic tundra, the alpine tundra and even Antarctica – with very rare species as well.
Not far away, in Galzignano Terme, there’s the Monumental Garden of Valsanzibio, a wonderful example of a XVII century symbolic baroque garden, which includes exquisite architecture, streams, waterfalls, fountains, ponds, water features, fish ponds, shrubs and trees from all over the world (with centuries-old specimens), and a 1-mile long boxwood labyrinth – one of the largest of the time and very-well preserved. Dogs have been allowed in Valsanzibio since last year: small pets can thus walk along with their owners, while medium and large dogs must be left with expert dog sitters in a special area that also includes a large swimming pool with a trampoline.

In Verona, the city of Romeo and Juliet, visitors shouldn’t miss the Garden of Villa Giusti: a splendid example of a XVI century Italian garden, which has been exceptionally well-preserved. It includes a flat part, with an elaborate parterre decorated with ancient statues, and an exquisite boxwood labyrinth. A portion of the garden stretches uphill, featuring groves, caves and several interesting artefacts.