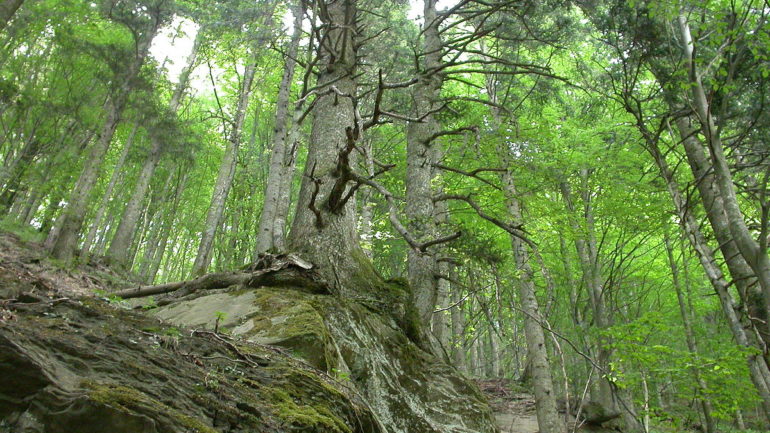 DISCOVERING WOODS AND FORESTS 3: SOUTHERN ITALY AND ITS ISLANDS

Our trip around Southern Italy and among the Italian forests continues: Basilicata, Calabria and Campania Regions are full of them. Near Potenza, for instance, you’ll be mesmerized by Rifreddo Woods, Farneta Wood (the biggest forest of Quercus frainetto in Italy), and di Cupolicchio Wood, full of wild orchids, narcissus, peonies and lilies in its undergrowth.

Between Potenza and Matera, at some 2.624-3.608 ft of altitude, there’s Gallipoli Cognato Lucanian Dolomites Park : a precious treasure chest of biodiversity in terms of flora and fauna, including chestnut trees, oaks, ferns, cyclamens, anemones, orchids and buttercups.

Another interesting wood is the one inside Pantano di Policoro Wood – WWF Oasis of Policoro Herakleia, in the province of Matera, which is rich in ashes, Alnus glutinosa, Populus alba, Turkay oaks, field maples, wild apple trees, and common hawthorn.

Between Basilicata and Calabra, there’s the huge Pollino National Park, mostly covered by woods of Fagus sylvatica, Abies alba, and Pinus heldreichii var. leucodermis). At lower altitudes, visitors would come across chestnut trees, Quercus cerris, adn Quercus ilex). The rare southern black squirrels live only in this park and you can find them by following the Monte Pollinello or Timpa della Capanna routes.

Uncontaminated forests also cover the rolling hills and rugged promontories of Calabria hinterland, most of which can be found inside the four biggest natural parks of the region:
Pollino National Park (it features many dead Heldreich’s pines in the Serra delle Ciavole area), Sila National Park, Aspromonte National Park, and Serre Regional Park. Inside the latter, there’s the impressive Stilo-Archiforo Wood, full of gigantic specimens of Albies alba.

Some 30% of the Campania Region, on the other hand, is covered by woods which grow as high as 6.561 ft, such as Calvello Beech Wood, Cognole Turkey Oak Wood, and Camerine Holm Oak Wood, in the province of Salerno.
Then, there’s Cuma Holm Oak Wood , near Pozzuoli, and the Vesuvio National Park, rich in maple trees, beeches, hornbeams, pine trees (Pinus pinea), holm oaks (Quercus ilex), hawthorns (Crataegus monogyna), as well as Euonymus europaeus and Smilax aspera in its undergrowth.

Sicily, along with Puglia, features the smallest quantity of forests (the biggest can be found in Trentino-Alto Adige, Liguria, Toscana, Umbria, and Sardinia), although it used to have many more tree formations in its ancient past. Nonetheless, just a few miles from Trapani, there’s
Baronia Wood, mostly featuring black locusts and ancient downy oaks;

Scorace Wood would be just as interesting, at some 1.312-1.968 ft of altitude and featuring many varieties of pines, cork oaks and eucalyptus trees growing among holm oaks, downy oaks, elms and shrubs (strawberry trees, broom, heather, euphorbia, and aromatic herbs).
In Piano Pomo (province of Palermo), there’s a hollow at some 4.590 ft, which hosts a small wood – it’s definitely one of its kind all over Europe as it features giant specimens of holly which have now reached 50-62 ft! All those wondrous trees are about 900 years old.

Further on, visitors should not miss the chance to visit Bosco della Ficuzza Reserve, which features the typical Mediterranean vegetation, with chestnut trees, cork oaks, holm oaks, turkey oaks, downy oaks, hawthorns, privets, strawberry trees, and myrtle trees surrounding a marshland, running along a river and also thriving on rocky soils. It is very rich in wildlife too: that’s exactly why Ferdinand IV of Bourbon bought this area from a parish church and turned it into his own hunting reserve at the end of the XVIII century. Inside this reserve, visitors can also visit the LIPU wild animal recovery centre and the very hunting lodge of King Frederick II.

Norther Sicily also offers some other vast wood with cork oaks, holm oaks, turkey oaks, downy oaks, holly, and beeches, such as the ones inside Madonie Park (which includes the impressive Monte Quacella holm oak wood), and Nebrodi Park, featuring ancient forests, such as Tassita Wood (4.747 ft of altitude), massively populated by wondrous specimens of Taxus baccata dating back to the Tertiary Period (from approximately 66 million to 2.6 million years ago), when the climate in this area was more temperate and humid.
There are also huge expanses of yews, hollies, cork oaks and chestnut trees, as well as some wetland thickly populated by birds and amphibians protected inside Vallone Calagna Reserve.

Further south, there are some other wonderful tree formations inside Mount Etna Park(Catania): on the slopes of the volcano, at lower altitudes, there are citrus, olive, almond, hazelnut and pistachio groves, eventually replaced by holm oak woods (Quercus ilex), Italian maples (Acer obtusatum), chestnuts (Castanea sativa), and ashes (Fraxinus ornus) – including some impressive specimens, like the “Chestnut of the Hundred Horses”, between 3,600 and 4,000 years old and 72-ft tall, a 62-ft tall chestnut trees in Taverna (Mascali), and a 65.6-ft tall holm oak in Carlino (Zafferana Etnea).
At some 6.561 ft above sea level, there are some wonderful beech forests (Fagus sylvatica) which reach their southern distribution limit right there; there are also endemic birches (Betulla aetnensis), relics of ancient glaciations, Bosnian pines (Pinus heldreichii var. Leucodermis), and Austrian pines (Pinus nigra laricio), the only ones in Sicily. Vast expanses of Etna broom (Genista aetnensis), create a striking contrast with their bright yellow shades against the black volcanic ash. Over 7.217 ft, there are small shrubs that look like bushes, featuring the endemic Sicilian milkvetch (Astragalus siculus), and wild sweet William (Saponaria sicula).

And finally, here we are in Sardinia , famous all over the world for its wonderful beaches, but which, surprisingly, is one of the most wooded regions in Italy today. In fact, a 2018 survey shows that 52 per cent of its territory is covered by forests, compared to 16 per cent in 1950, and this thanks to the efforts made by the Region, both for reforestation and maintenance. In fact, in prehistoric times Sardinia, like Sicily, was a very green and very wooded island: the Phoenicians, Romans and Carthaginians began to destroy its forests to build roads and ships, sow cereals (the island was considered the granary of Rome), flush out rebels and fugitives; from the mid-1700s the Savoy family continued to meet the needs of coal, timber and railway sleepers, above all of the mining extractive industries; after the unification of Italy, Italians, English, French and Belgians continued to procure the sleepers for the railways, the trusses for the mines, the wood for the smelting of minerals, the rind from which to obtain the tannin for the tanning of leathers and other dyes; in recent times, it was the turn of arson to devastate what remains of the Sardinian forest heritage, but fortunately for thirty years the forest management activities have resumed, now governed by the Forestry Authority of Sardinia, aimed at conserving, enhance and re-naturalize the woods, reintroducing native species.

Finally, there’s Sardinia, a charming island widely renowned for its wonderful beaches, which has quite surprisingly recently returned to its former status of a thickly wooded part of Italy.
In fact, according to a 2018 survey 52% of Sardinia is covered by forests, while it used to reach a mere 16% in the 1950s; thanks to the local efforts, involving reforestation and maintenance, the island now actually looks like how it used to be in ancient times before the Phoenicians, the Romans and the Carthaginians began destroying its forests to build roads and ships, sow cereals (the island used to the very “granary of Rome”), and flush out rebels and fugitives.
Further deforestation was undertaken by the Savoy Royal family in the 1700s, this time to gather coal, timber and manufacture railway sleepers, not to mention massive mining activities.
After the unification of Italy, Italians, English, French and Belgians went on exploiting Sardinian wood for building railways, mine structures, material mineral smelting of minerals, and tannin for the leather industry.
To make things worse, some recent arsons devastated the last remains of the Sardinian forest heritage, but fortunately much more sensible and thorough forest management activities have been carried out for some 30 years now, thanks to the Forestry Authority of Sardinia. The latter has also reintroduced some native tree species.
The typical Mediterranean scrub landscape now features numberless plants, including
Erica arborea, Erica scoparia, strawberry trees, garrigues, Juniperus nana, Prunus spinosa, and Calycotome spinosa. Further inland, there are vast tree formations made of holm oaks, ashes, manna ashes, Fraxinus ornus, holly, Acer monspessulanum, yews, Quercus suber), Pinus pinaster, and Pinus nigra.

The most interesting and beautiful woods are the Sette Fratelli Regional Park, with strawberry trees, myrtles, heather, juniper, alders and holm oaks – widely inhabited by wild boars, rabbits, martens, wild cats, golden eagles, peregrine falcons and Sardinian goshawks, the Sulcis Nstional Park, near Cagliari, populated by native deer and hares, and Montimannu Forest, near Iglesias – this forest is dominated by holm and cork oak woods and is home to several animal species, including mouflons and deers. Inside the Montimannu Forest, there are also some impressive waterfalls.
Not to mention the Marganai Forest nearby, where the holm oak is the most widespread species, although there are also remains of hollies and maples.
Then, there’s the Sacred Wood of Santa Maria Bangargia , made of elms, poplars, secular olive trees and mastic trees. This wood is less than 2 miles away from the village of Collinas, in central-southern Sardinian Marmilla territory.
In the central-western part of the island, there’s the huge Mount Arci Forest, on the Mount Arci volcanic massif, which covers some 15.000 acres on all sides of the mountain; it features some 500 typical Sardinian plant species.

Last but not least, the southern part of Gallura features Mount Limbara Forest, a large area with many cork trees, holm oaks and strawberry trees. What makes this forest truly unique is the granite, which appears in majestic shapes and sizes.

*All the pictures on this page were taken from the Internet