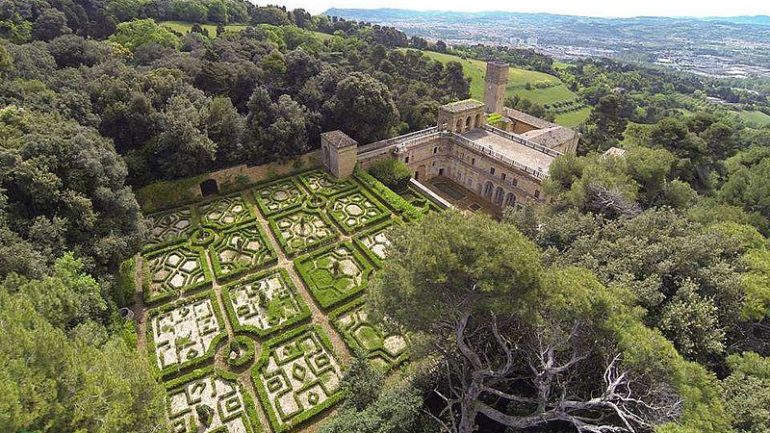 Summer is probably the best time of the year to visit Villa Imperiale and its amazing garden, near Pesaro, also because they are both open to the public only between June and September (only on Wednesdays and by reservation. There’s a special shuttle service from Piazzale della Libertà, at 4 pm).

Located near Pesaro, within the Colle San Bartolo Natural Park, Villa Imperiale is plunged into an agricultural and wooded landscape. It consists of two buildings connected by an elevated passage: the first part, a quadrangular building with a tower and an internal door, was built by Alessandro Sforza, Lord of Pesaro, and was finished in 1449; the construction works of the second part by Francesco Maria della Rovere and Leonora Gonzaga, lords of Urbino, began in 1520, based on a project by the architect and painter Girolamo Genga.

The old wing was used for services and the servant quarters, while the second, embellished with courtyards, terraces, and loggias, was enjoyed by the noble residents and their guests.

On the upper part of the property, there is a semi-natural forest, mostly featuring holm oaks and used for hunting in the past. Walking along a shady avenue, visitors can reach an open space, with pines and other trees, then the terraced garden, on two levels, and finally the courtyard in front of the new wing.

Originally, the upper terracing featured citrus and mixed hedges, while the lower one was delimited by a lemon and cedar espalier and had regular flower beds in the centre bordered by myrtle and laurel and adorned with bitter orange trees. (<em>Citrus x aurantium</em>).

Especially after the Second World War, the original gardens were destroyed, but then they were rebuilt with a new layout by the current owners, the counts Castelbarco Albani.

If you are in that area, you should absolutely pay a visit to Villa Imperiale and its gardens, perhaps adding other nearby green facilities, nurseries and nature reserves – please visit www.luoghi.italianbotanicalheritage/Marche for more information.